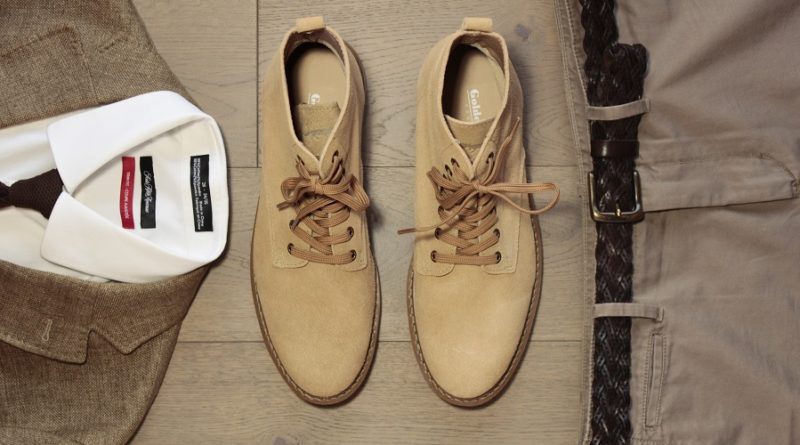 Many of us have been waiting patiently for a decent alternative for the J.Crew Kentons Bond wore in SPECTRE to turn up. For almost a year now, the post for alternatives has basically been filled with lower priced, three eyelet desert boots or $250 plus, high end footwear from Alden, Chippewa or Thorogood. Then, in December last year, I found the Golden Fox Boondocker Boots on Instagram. They were the right style, the suede uppers were a close color, they were Goodyear welted, and at $119.95 they were the right price. So I added them to the post. And then I reached out to William, the owner of Golden Fox, to ask some questions. He agreed to send me a pair for review, and here we are!

Just FYI, I currently wear boots from To Boot, Florsheim, Blundstone, R.M. Williams, Timberland (these Coulters), Clarks, Börn, Vasque, Salomon and Eastland. So I have a pretty broad collection to which I can compare the Boondockers.

The Materials and Finishing

For the price, Golden Fox has delivered a very impressive boot. For me, the positive experience began with what’s included in the box. They’ve included two extra sets of laces (brown flat and brown round) and a fun brochure/catalog that gives a little bit of the history behind the Boondocker style boot, going back to World War II. Nice touch! 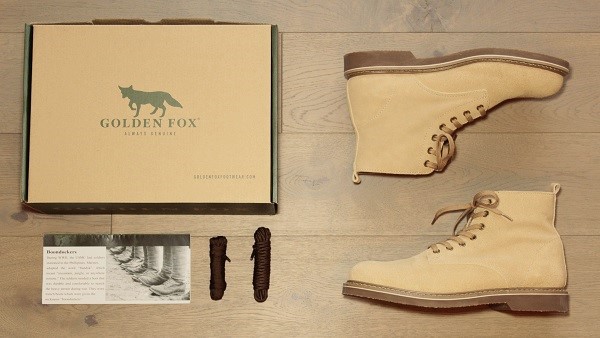 As for the boots themselves? We’ll begin with the suede uppers. The nape is a little rough, but the leather is a good thickness. Nothing feels floppy or cheap. On their website, Golden Fox calls these boots “unlined”. But that’s not exactly true. The collars are lined with soft pigskin leather. And from the arch to the front of the boot, there’s a type of micro-fiber liner bonded to the suede. That lining, combined with the stiff heel cup and toe box, delivers a boot that’s lightweight but feels substantial.

Hardware-wise, the only thing I need to say is: I don’t think the metal eyelets are going to pop out anytime soon. They’re backed by the pigskin leather liner and locked in place.

The only flaw I found in the uppers was shallow scratch, about half an inch long, in the nape on the top of the left boot. It’s definitely just a cosmetic problem. But it’s there, so I need to tell you about it.

Overall, the finishing inside the boot is great. I saw no problem areas around the inside cuff, heel cup, or where the microfiber liner is stitched in. They’ve finished everything cleanly with neat, straight stitching.

The Boondockers do have removable footbeds, which I think is a good thing. Our feet aren’t all the same. So having the flexibility to insert a different footbed will help some of us fine tune the fit. But it does mean the manufacturer exposes their “behind the scenes” construction to the customer. Golden Fox’s stitching is a little less refined here, but still looks very strong.

For me, one of Golden Fox’s main selling points is offering Goodyear welted construction at this price point. And boy, does it feel solid. The oil-resistant crepe outer sole is bonded onto the mid-sole, so I doubt you can re-craft them (Update: William has informed me that, as with most Goodyear welted boots, their Boondockers can be re-soled. Big plus!)  . But, I discuss below, I wore the Boondockers for a full day of heavy walking and there was literally no noticeable wear to the sole. Honestly, I don’t see durability being an issue. 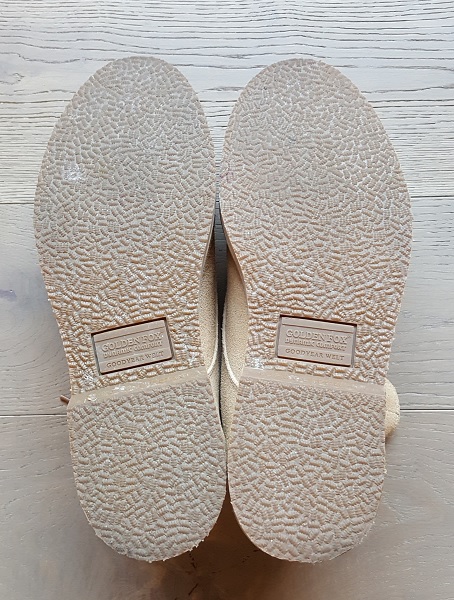 Overall, aside from that small scratch in the suede, I’m giving the Boondockers high marks for materials and construction.

I’m a size 10 U.S./43 in most shoes and boots. For width, I’m a wide D, sometimes ranging to an E. The size 10 Boondockers, with an interior length of 11.5″, are perfect fit. Snug in the heel and instep, a comfortable width at the forefoot, with a little bit of wiggle room in the toe box. So, fit is true to size as far as I can tell. 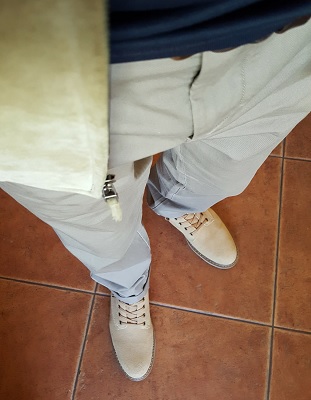 Out of the box, the Boondockers are very comfortable. I wore the boots for a full day of serious walking over a mixture of surfaces. Everything from tile to concrete to grass to gravel. And at no time did I think to myself, “I need to break these in a little.” They were supportive, there was no rubbing or slippage at the heel, and the flex was just right. And even though they’re suede, I think the solid construction will stop them from stretching out too much. Golden Fox gets high marks from me for fit and comfort.

All good so far. But what we all want to know is how close the Boondockers come to the screen used Kentons. The style and shape are almost exactly the same. So I’ve no issues there. Regarding the color, the suede uppers are definitely lighter than the “Sahara” tone of the Kentons. And obviously the sole isn’t brick red.  No getting around this, although a quick spray with some suede protector did darken the color a little.

But with clothing, I’m a guy that’s usually satisfied with “close enough” as long as I get the desired effect. So the fact that the Boondockers don’t exactly match the real-world color of the Kentons isn’t a big deal for me.  Especially when you take into consideration the fact that the boots looked much lighter on-screen with the Brunello Cucinelli Morocco outfit. 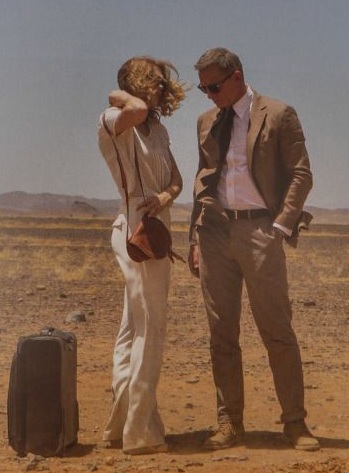 What would I change? Speed-lacing hooks. Golden Fox, please add speed-lacing hooks in the next version of the Boondockers. If there’s one thing that frustrates me with wearing higher collar boots, it’s having to loosen all the laces to get them on and off. So a couple of hooks at the top would definitely help.

After searching for more than a year, I feel pretty confident saying that the Golden Fox Boondocker is a real winner for Bond fans. We’re getting an incredibly comfortable, very well made boot that’s as close to the Kentons as anything else on the market right now. And, at just under $120, we’re getting it at more than fair price. Honestly, I can’t ask for much more than that. Well done, Golden Fox!