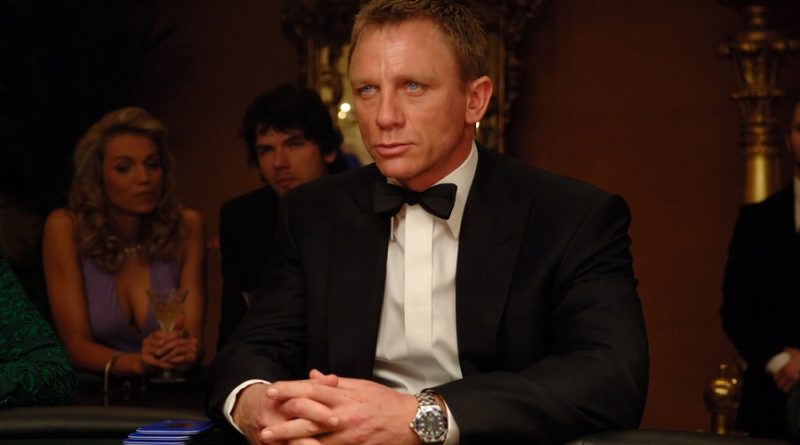 We’ve already taken a look at affordable alternatives for the Sean Connery Bond Rolex here and the Pierce Brosnan-era time pieces here. Now we’ll explore some options for the Daniel Craig James Bond Omega watches. Craig’s era has seen a wider variety of models from the iconic Swiss brand. In some ways, it’s great to have a broader selection of styles. It means there’ll be something to suit almost any taste. But it also means investing more if you want to get the complete collection.

Because we need to look at alternatives for eight different watch models (yes, I’m including the vintage Omega from the very end of SPECTRE), I’m splitting this post in half. We’ll focus first on alternatives for the Casino Royale and Quantum of Solace models. The second half will tackle Skyfall and SPECTRE’s watches.

And now the standard disclaimer. I won’t be including fakes as alternatives. If that’s what you want, there’s plenty on Ebay and similar websites. Instead, I’ll only be including watches from (relatively) reputable manufacturers. When I think there may be some cause for concern with a seller, I’ll let you know in the description. Alright, let’s get started! 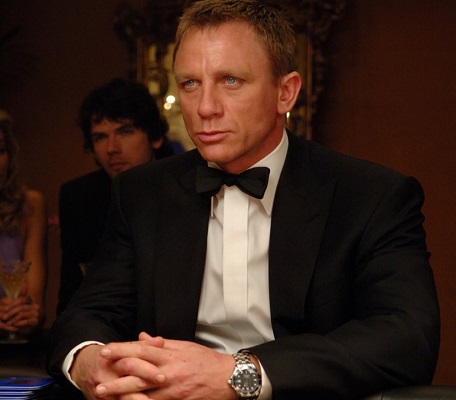 Because of the visual similarities to the earlier Omega Seamaster Professionals, many of the alternatives from our James Bond Brosnan Omegas post will work just as well as options for Craig’s watch. But I’m including some additional choices below to be thorough. 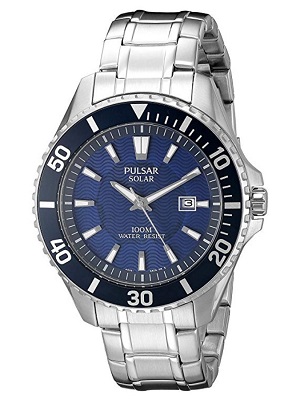 A solid alternative that you can pick up for less than a hundred bucks. The movement is Pulsar’s AS32 Solar quartz, which charges itself via any nearby light source. As far as looks go, they’ve used stick indices instead of the dots. And with its 44mm case and 100m water resistance rating, the watch is definitely on the large and casual side. But the face does have the subtle wave pattern that was a hallmark of the Seamaster series for years. 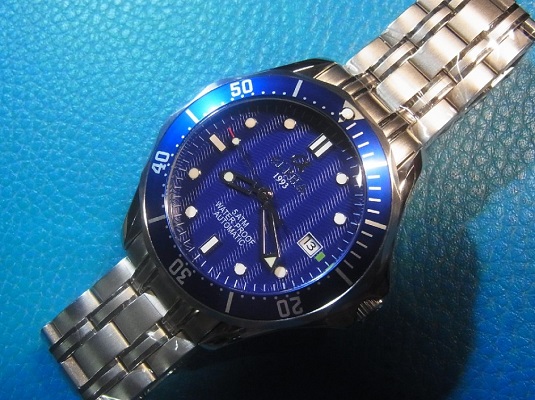 The Alpha was one of the alternatives in our original post on Brosnan-era Omegas. And “Chris.. T Dalt rules” just suggested again in the comments for the updated article. Alpha has updated the movement of their Seamaster “homage” to a 21 jewel Miyota automatic. Which is a nice upgrade. However, the water resistance rating of 5 ATM (50M/165 feet) means this model is good for some light swimming and that’s about it. If screen accurate looks matter more to you than practical performance, the Alpha is worth a look. You can read more about the Alpha brand in general in this thread on the WatchYouSeek forums. Just note that Alpha only honors the warranty if you buy the watch directly from them! 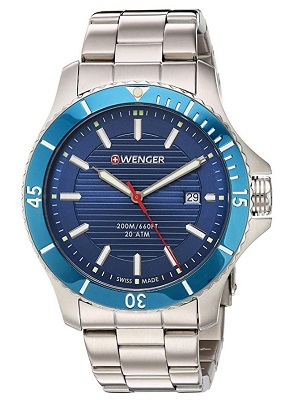 The asking price of $225 is starting to get up there for a quartz movement. But Wenger has been in the game for a while and their Seaforce is made in Switzerland. Like the Pulsar above, the watch uses stick indices and thinner, baton style hands. We’re also getting a patterned face that gives it some Seamaster-style visual interest. And the 43mm case has a water resistance rating of 200m. So it can handle the pressure of some shallow diving. For those of you in the U.S., Amazon had the best price I could find. In the UK, I’ve linked to Jura Watches. You can also check out more details about the Seaforce on the Wenger website. 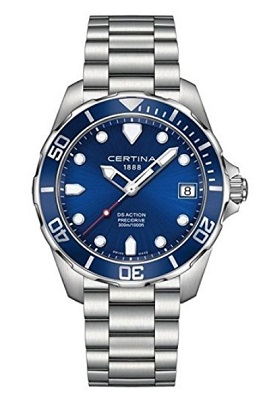 The Certina DS Action Diver Automatic was our “Best Option” for the Brosnan-era Omegas. But I’m including their quartz version here as well. Visually, the semi-skeletal baton hands on this model might be a better match for the Casino Royale Seamaster Diver. However, I felt that the automatic’s Powermatic 80.111 movement, based on the ETA 2824-2 engine, was simply better value for the money.

Having said that, there’s still a couple of reasons to take a closer look at this quartz model. The smaller 41mm case will probably look better on various wrist sizes. And the stats come very close to those of the automatic version (made in Switzerland, sapphire crystal, 300m water resistant rating). So giving up the automatic movement is not going to significantly impact performance. One thing I will warn you about: in some of the product photos, the watch looks to be a much brighter blue than the more muted tone of the original Omega. Since I haven’t seen this model in person, I can’t say how accurate that is.

For the first half of Casino Royale, Bond’s watch of choice was the Omega Planet Ocean 600M Big Size Ref. 2900.50.91 on a rubber strap. As the name suggests, this was a biggun. With a case diameter of 45.5 mm, it was really far too large to be used with Bond’s dressier looks. But for taking a beating while running and jumping around a construction site and embassy (and winning a DB5 at poker), it worked just fine.

In Quantum of Solace, Bond stuck with one watch: the smaller 42mm Omega Planet Ocean 600M Ref. 2201.50.00. Style-wise, these Planet Oceans are easily my favorites of the Craig-era Omegas. Not exactly sure why. Maybe it’s the slightly thinner, black and silver coin edge bezel. Or the combination of the Arabic numeral and stick indices with the broad arrow hands. Whatever the reason, I just think they’re beautiful looking timepieces.

A bit of logic about personal use vs. screen accuracy …

So why group these two models together? Because aside from the case size and band style, they’re virtually identical inside and out. And since it’s relatively easy (and inexpensive) to change bracelets and straps, I think the size of the watch is a more important personal consideration than the band style when choosing an alternative. If you have thinner wrists, any watch over 43mm is going to look pretty huge. Likewise, bigger guys may feel that a sub-42mm watch looks too dainty. If you focus on getting the right case size for your wrist, once you find a model you’re comfortable with you can pick up either an extra metal bracelet or rubber strap and have one alternative that works for both Omegas. 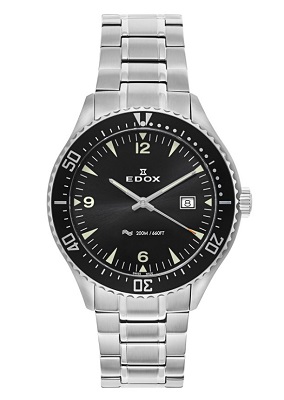 Coming from a Swiss watch manufacturer that’s been in continuous operation since 1884. And most people outside of Europe have never heard of. Edox is often referenced as a quiet (some would say “underrated”) brand that delivers excellent value for the price.  Their C1 Driver is a good example of that. The movement is a proprietary Swiss quartz, based on the ETA F 06.111. It’s placed inside a large 45mm case with a 200M water resistant rating. That’s finished off with a sapphire crystal and stainless steel bezel. Aside from the baton-style hands, the C1 Diver certainly has the Planet Ocean vibe. And the triangular indices pull in some of the looks from the SPECTRE Seamaster 300M. Put this one on a rubber strap and fans of the “Big Size” Planet Ocean will be good to go for just over two hundred bucks. 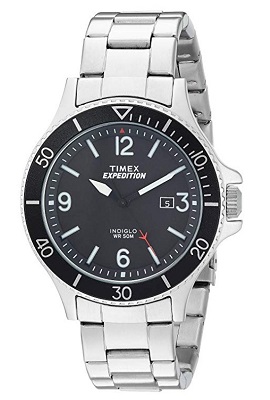 Just a basic quartz from Timex with their popular Indiglo function. But we’re getting a few of those Planet Ocean style details with the thinner (fixed) bezel and mix of Arabic numerals and stick indices. At 43mm, it’s more inline with the size of the Quantum of Solace Omega. However, the 50M water resistance rating means this is almost strictly a land lover’s watch. 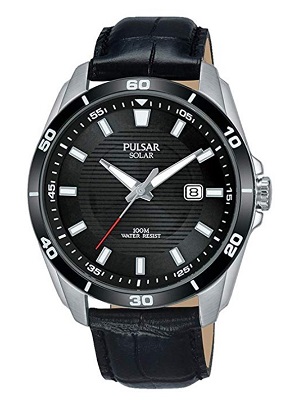 I honestly had no idea I’d be including two Pulsars in this post. Despite the leather band and lack of Arabic numerals, I actually think the PX3157X1 comes pretty close to capturing the feel of the Planet Ocean. The thinner (fixed) bezel helps get the style right. The face also has a subtle line pattern that brings to mind the Seamaster. As for the specs, this watch is again powered by Pulsar’s solar quartz movement. The 100M water resistant rated, 40mm case is on the smaller side. So probably better for guys with thinner wrists. But you’d obviously need to purchase an extra rubber strap or metal bracelet, depending on your preference, to really get the style. For an idea of what the PX3157X1 could look like on a bracelet, check out the Pulsar PS9223X1. 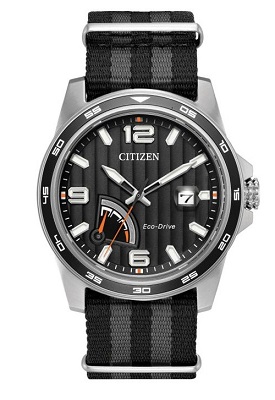 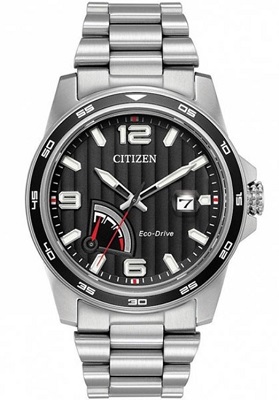 I was on the fence about including these models from Citizen. Obviously, the design is a lot busier than the Planet Ocean’s. But the more I looked at them, the more they started to grow on me. Especially the one on the SPECTRE style NATO strap. The silver and black bezel is a great match for the Omega, even if it’s fixed. And yes, that Power Reserve Indicator is another feature on an already crowded face. However, I suppose it could be useful and it’s not too obnoxious. Citizen’s Eco-drive movements draw power from any light source and it certainly has its fans. The 100M water resistant rated case is 42mm, which should work well on most wrists. And finally, Citizen offers a very respectable 5 year warranty on their products. I think I’m starting to see these as a “techy” Planet Ocean, which is cool in its own way. 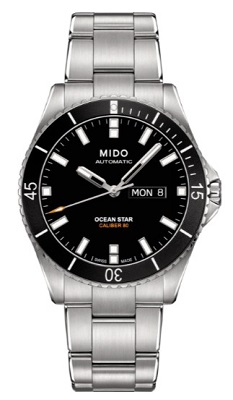 Just my personal opinion, but I think Mido really hit it out of the park with the style of their Ocean Star series. Unlike the Citizen, these watches look clean without being boring. They’re powered by Mido’s calibre 80 automatic movement which has an 80-hour power reserve. The 42.5mm case is water resistant rated to 200 meters and has a sapphire crystal, uni-directional aluminum bezel and screw-down crown. All in all, an elegant and fairly complete package for the price. You can check out reviews for the Ocean Star at Worn & Wound and in this thread on the WatchYouSeek forum.

Have some suggestions for affordable alternatives for the Daniel Craig James Bond Omega watches? Tell us about them in the comments below! And remember you can also find Iconic Alternatives on Facebook, Pinterest, and Instagra, just in case you’re looking for even more Bond inspiration.